Obesity is an excessive accumulation of fat that can affect the optimum state of health. It is common knowledge that the excess of macronutrients in the adipose tissues stimulates them to release inflammatory mediators and decrease the secretion of inflammation inhibitors, thus creating a pro-inflammatory and oxidative stress environment.

Obesity is one of the characteristic elements of the metabolic syndrome. It appears that the relationship between these two factors is established through inflammation. 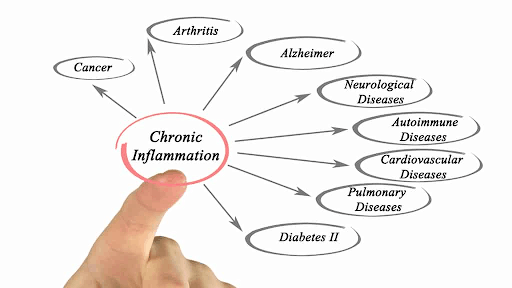 There are two types of adipose tissues: brown and white. In new-borns, the brown adipose tissue helps regulate the energy used by means of thermogenesis. In adults, there is an inverse correlation between the brown adipose tissue and the body mass index (BMI). That is to say, the higher the BMI, the smaller the amount of brown adipose tissue. This is especially common in seniors, which highlights the role of this tissue in the human metabolism. The white adipose tissue was thought to be a type of inert tissue, whose only function was to store energy. Now we know that is has a much more important role and that it is actively involved in regulating both physiological and pathological processes, including immunity and inflammation.

Inflammation is an ordered sequence of events that consist in the release of mediators and the expression of chemical receptors in our body, this is intended to maintain the homeostasis of the organs and tissues and it is also a response mechanism to the damage and destruction of the tissues.

There are two types of inflammation depending on how long it lasts: acute and chronic. Acute inflammation is short-term and at a cellular level it is characterised by edema and leukocyte proliferation.  Chronic inflammation lasts longer and it results in connective tissue and blood vessel proliferation phenomena, along with the migration of other cells of the immune system: the lymphocytes and the macrophages.  These inflammatory phenomena are mediated by numerous different molecules, such as Interleukin -6 (IL-6), tumor necrosis factor -α (TNF-α), or  C-reactive protein (CRP).

Obesity has been widely associated with chronic inflammation, which is a cardiovascular risk factor and it is the leading cause of other diseases such as bleeding disorders, arteriosclerosis, insulin resistance and diabetes.

When there are excess nutrients more adipose cells are produced (hyperplasia), which are bigger (hypertrophy). This increases the possibilities of the blood vessels not supplying the adipose tissue with enough oxygen (hypoxia). This produces changes in the tissue, such as cell death (necrosis), which is interpreted as being a type of damage that leads to the secretion of the aforementioned pro-inflammatory substances, along with free radicals.

Numerous studies describe a positive relationship between the levels of obesity and IL-6. In fact, one third of the IL-6 concentrations found in our blood come from the adipose tissue. Another marker that is often associated with obesity is the C-reactive protein, which increases when the body mass index increases.  High levels of CRP are associated with myocardial infarction, high blood pressure, cardiovascular events in diabetics and strokes. The CRP is synthesized in the liver and this synthesis is mediated by IL-6.

This overexpression of pro-inflammatory substances is considered to be the connecting link between obesity and inflammation. The increase in pro-inflammatory mediators is related to cardiometabolic risk, arteriosclerosis, coronary heart disease and heart failure.

The adiponectin is a substance that has an anti-inflammatory and anti-atherogenic effect. It is produced by the adipocytes. However, less of this is released when there is more adipose tissue. The high levels of CRP, IL-6 and free radicals are associated with a decrease in the adiponectin. In fact, the administration of antioxidant agents re-establishes the production of adiponectin, which provides protection against vascular endothelium damage caused by oxidative stress.

It has been proved that calorie restriction and the subsequent weight loss reduce the levels of these pro-inflammatory markers. With regard to the type of diet, it has been demonstrated that those with high sugar content increase these markers of systemic inflammation. In one study carried out on healthy adults who consumed food products that were high in glucose or fructose for two weeks, an increase in the CRP was observed. The trans fats in the diet also increase the levels of pro-inflammatory substances. In contrast to this, it has been observed that in high fibre diets, whether it is in the diet itself or as a supplement, there is a decrease in the levels of PCR and IL-6.

All this data goes to show that an excess in weight is the equivalent of a pro-inflammatory condition that causes oxidative stress and damages the endothelium of our arteries, but we can reverse this condition through a diet that restores our ideal weight, which is also rich in antioxidant and anti-inflammatory agents.  This diet is a delicious blend of whole foods such as vegetables, fruit and lean meats.